Menu
You are here:   Swim Advisory

Yes, our beach is safe. Sometimes the news media causes “alarm” about beach water, those of us who live here understand what is really going on and we hope the information below will help educate you. Please read the facts below.
Most important take away: after it rains really hard for a period of time, the rain drains more quickly, and that does not give nature enough time to “clean” the storm water draining off yards, parking lots and roads. Generally, it takes less than 24 hours for bacteria levels to return to normal. Remember, beachgoers only need to avoid the outfall pipes (those little streams of warm water draining onto the beach): “Swimming is not advised within 200 feet in each direction of this swash/stormwater outfall.”

Ocean Lakes level is usually 10 or less (the trigger is 104+). SCDHEC officials explained that Ocean Lakes’ average is at 10.91 – 11.01, barely even triggering the minimum to be considered for a long term advisory of 10-15.

Know the Truth, Know the Facts

DHEC samples water at the state’s beaches twice a month starting May 1 to October 1. Beaches in the Myrtle Beach area are sampled weekly. You can see test results here. Ocean Lakes has two swashes that are tested.

Guests are confused by some recent headlines and social media posts regarding a no swim advisory. Sadly there has been some misleading information on the web and our team would like to address the issue. When concerned guests and home owners call Ocean Lakes with questions, we want to make sure our teammates are giving them the correct information. We know that vacations are important, but that health and safety come first. As local residents we understand the stormwater drainage issues and the swim advisories, we need to help Myrtle Beach guests understand. 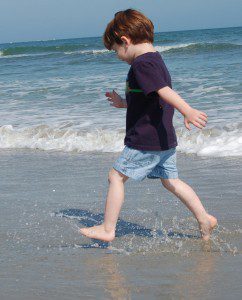 Is it Safe to Swim in Myrtle Beach?

Yes! It is safe to swim in Horry County (including Myrtle Beach). Know the facts! Below are some tips for families and the facts about the issue.

OLFC continues to be in communication with SC DHEC’s Beach Management in the Myrtle Beach Office, located on Shine Ave., (843) 238-4528 to discuss what Long Term Swim Advisories mean and bacteria levels.

Here are the facts that SC DHEC stated to Ocean Lakes Family Campground:

Water Tested to Dispel Any Concerns – We Live and Play Here, too

What Areas of the Beach are the Swimming Advisories located in? 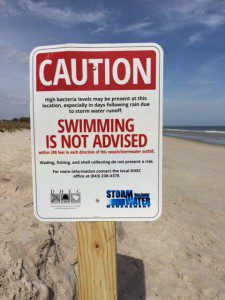 They are located where the pipes to the drainage systems (carrying storm water) end. These pipes located along the Grand Strand beaches are referred to as swashes/outfalls/stormwater discharge locations. You see them along the sand dunes line. They often have a shallow stream or gully of water meandering it’s way to the surf. Some people assume they are small tidal pools, but they are made of water draining off the inland. You can view a map of the stormwater discharge locations that are monitored by DHEC on their website.

See Caution Signs on the Beach?

READ them carefully! LOOK closer at WHAT they actually say. The KEY word is “MAY.” These signs were posted in Myrtle Beach and Horry County in 2007 – 2008. Some news sources are making a big deal about a “long term swim advisory.” It was explained by DHEC officials that these SIGNS are the reason it is called “long term” advisory. As far as coastal states go, South Carolina is exceptionally vigilante about monitoring the bacteria levels along its coast. 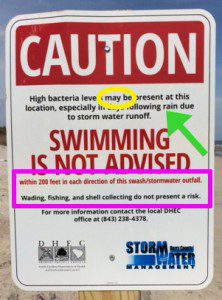 What Causes the Bacteria Levels?

Animal pollution (waste) can be a major source of bacteria and excess nutrients in local waters. (This is one reason that Ocean Lakes strongly encourages guests to pick up after their pets, see our iCare Program and Policies.) Stormwater can pick up debris, chemicals, dirt, and other pollutants and flow into a storm sewer system or directly to a lake, stream, river, wetland, or coastal water. Anything that enters a storm sewer system is discharged untreated into the waterbodies we use for swimming, fishing, and providing drinking water. Learn more about stormwater on DHEC’s site or the EPA brochure. Learn how to help prevent runoff/stormwater pollution.

Facts from the Myrtle Beach Area Chamber of Commerce: