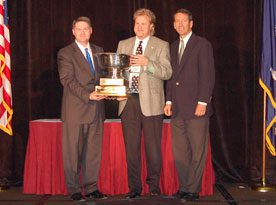 Ocean Lakes Family Campground in Myrtle Beach, SC received the 2006 Governor’s Cup at the awards luncheon of the 41st annual Governor’s Conference on Tourism & Travel at Kiawah Island Golf Resort on Tuesday, February 7, 2006. The Governor’s Cup is given annually by SCPRT to an organization that has had a significant economic impact on its community and state while also helping to improve the quality of life in South Carolina. “We are extremely excited about this award,” explains Lance Thompson, Vice President/General Manager of Ocean Lakes. “Ocean Lakes has received major recognition in the camping industry, but the Governor’s Cup covers many industries. We are honored to be in the company of past recipients such as Broadway at the Beach, Ripley’s Aquarium, Parmount’s Carowinds, and The Carolina Opry, all outstanding in their industries.”